The ALTAI™ Experience: In Real Life

Any boot company can tell you they have the best boots. But here at ALTAI™, we believe in the importance of reviews; reviews are proof of our boots’ performance. Feedback and input from wearers of our boots are how we can continue to strive to bring you the perfect, multi-purpose, rugged boot. Recently, we received this personal account of our MFT100s; so you can see the proof for yourself. 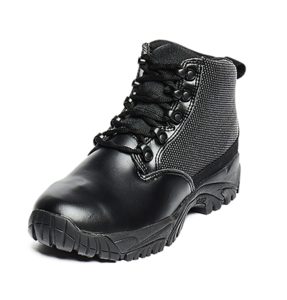 A big ‘Thank You’ to Dylan Sauer for sharing his ALTAI™ experience.

Many ALTAI™ customers are ecstatic about the boots they have, including myself. I have worn these boots for my security job, doing work for Bay City Public Safety’s Reserve Unit, and for playing intense scenario paintball in the woods. I was initially only going to use the pair for police work and security, but I decided to try them out on a paintball field. I did receive a few paintball splats to my feet, but the paint and mud come off very easily with a wet rag.

Back in January, there was a charity auction for a famous paintball player, Chris Lasoya. Chris was a firefighter who was burned trying to put out a fire. With the medical expenses being so high due the amount of burns he received form the fire, medical expenses would be astronomical. Another fellow paintballer, and ALTAI™ sponsored athlete, David “Reaper” Justin, knew it was time to step in and help out a fellow paintball player. David put together a charity auction and I was added to the group auction on Facebook. After a short bidding war, I won the pair of MFT100s.

After having these boots for nearly 7 months, I would consider these boots to be the best I have ever worn. I’ve gone through many pairs of boots throughout my time and none has lasted as long as my pair of MFT100s. My legs will give out before my feet decide to blister or cramp up. I’ve crawled through swamps and waded through water with these boots on and they have never smelled “swampy” afterwards. On top of all that, I have also been working around forty hour work weeks with these boots on.

I have also worked plenty of police details in Bay City, including concerts in Wenona Park for concerts, Southend Little League for their National Night out, and Veterans Park for the Bay City Fireworks Festival. ALTAI™ boots support me while I am supporting my community.