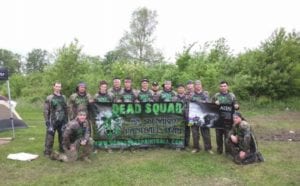 Leo McSherry and Ryan Begin of the ALTAI™ boots team give their personal account of last month’s charity event with Dead Squad Paintball team, Challenge for Children’s, that we covered earlier. We at ALTAI™ strongly believe in supporting worthy causes and the boot guys would like to share how important this specific cause is to us.

A younger me would have been more excited about the dusty dirt road we drove down as we made our way to the 2017 Challenge for Children’s paintball event. A younger me drove an older car, though, and as much as I hate to admit it, a life in the suburbs has its benefits- one of which being much less gravel in my travel.

But today wasn’t about me and my fixation with maintaining a clean car. It wasn’t about getting out and showing support for the Dead Squad paintball team, a group of upstanding athletes and advocates of the ALTAI™ brand since day one, either. Today was about Challenge for Children’s, and it was not until reflecting on the day that paintball proved as a perfect pairing for passions that pull people together.

When Ryan and I arrived, an event coordinator had already begun reviewing rules surrounding the day’s game. Professional players, groups of friends, father/son combos, couples young and old, and lone wolfs all listened on, preparing for deployment in a manner I imagined mirrored a SWAT team readying for raid. I even saw my neighbor, a full-time mom managing a full-time career, who still finds time to support a great cause. And if I know anything about moms, she was going to be a formidable force for any unfortunate foe.

It was not long before we found ourselves talking to a young man who had traveled all the way from Chicago to participate in the day’s event. Conversation revealed that for him, Challenge for Children’s strikes very close to home. He had been diagnosed at childhood with a condition resulting from his brain growth exceeding the safe capacity of his skull. Children’s doctors, like the ones supported by the efforts of Challenge for Children’s,  were able to perform vital surgery that ultimately enabled him the opportunity to continue living an active life. As an expression of his gratitude, he now dedicates his time mentoring a young boy being treated for the same condition.

Ryan and I were so taken by the atmosphere of the event that we almost missed our planned morning meeting with the Dead Squad team, but we were glad we didn’t.  The entire Dead Squad team dedicated their day sublimating time on the field to provide ALTAI™ insight about the history of Challenge for Children’s, explain all the different types of paintball and the strategy surrounding, and even involve Ryan and his camera in some first-hand action.  All I will say is the camera’s okay. As for Ryan, bruises go away.

We would like to extend a special thank you to Challenge for Children’s and all the volunteers/participants who contributed to another successful event.

Learn more about Challenge for Children’s mission from Richard of the Dead Squad paintball team.

Be sure to check back with us for more coverage on the Dead Squad paintball team and the sport of Paintball!