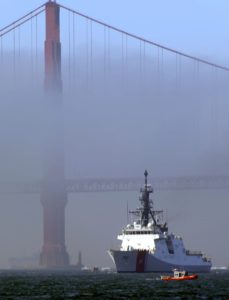 Our last, but certainly not least, branch of the armed forces that we are spotlighting this week is the United States Coast Guard. Yes, they are a part of the Armed Forces but unlike its fellow Armed Forces branches, it does not belong to the Department of Defense.

With around 40,000 members strong, the U.S. Coast Guard is almost as large as the New York Police Department. And it’s a good thing too; the Coast Guard does a wide variety of critical missions. They can range from Search and Rescue, aid to navigation, drug interdiction, to maritime security.

Also, the Coast Guard serves all over the world, not just on our shores. Locations include Bahrain Japan, the Netherlands, even the Arctic and Antarctica. So, let’s give a salute to the men and women who serve our country by keeping the waters safe.